M 29, also known as NGC 6913, is an open cluster of star in the Cygnus constellation. It was discovered by Charles Messier in 1764, and can be seen from Earth by using binoculars.

This cluster can be seen in binoculars. In telescopes, lowest powers are best. The brightest stars of Messier 29 form a “stubby dipper”, as Mallas says it. The four brightest stars form a quadrilateral, and another three, a triangle north of them. It is often known as the “cooling tower” due to its resemblance to the hyperboloid-shaped structures. A few fainter stars are around them, but the cluster appears quite isolated, especially in smaller telescopes. In photographs, a large number of very faint Milky Way background stars shows up.

Messier 29 can be found quite easily as it is about 1.7 degrees south and little east of Gamma or 37 Cygni (Sadr). In the vicinity of Messier 29, there is some diffuse nebulosity which can be detected in photographs. 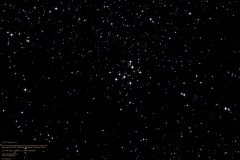