The Great Globular Cluster in Hercules (also known as  M13, or NGC 6205) is a globular cluster in you guessed it the constellation of Hercules.

It was discovered by Edmond Halley in 1714, and catalogued by Charles Messier on June 1, 1764.

With an apparent magnitude of 5.8, it is barely visible with the naked eye on a very clear night from a dark site, (unlike the Crayford area). Its real diameter is about 145 light-years, and it is composed of several hundred thousand stars, the brightest of which is the variable star V11 with an apparent magnitude of 11.95. M13 is 25,100 light-years away from Earth.
Its diameter is about 23 arc minutes and it is readily viewable in small telescopes.

The Arecibo message of 1974 was transmitted toward this globular cluster. The reason was that with a higher star density the chances of a life harbouring planet, with intelligent life forms, were higher.

Images of M13 by Simon Dawes 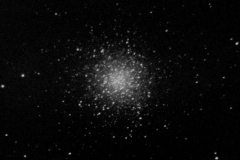 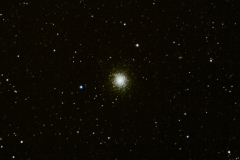 Images of M13 by Brian Thompson 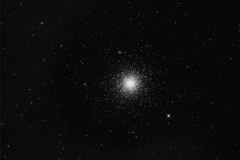 Images of M13 by Martin Crow 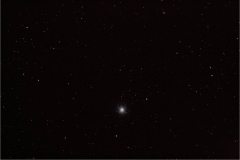 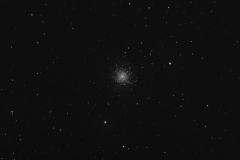 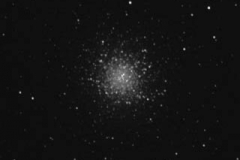 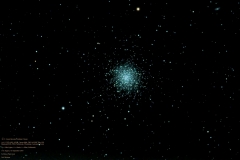 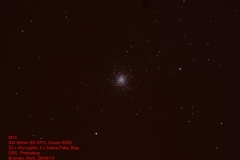