There have been astronomy classes at Crayford Manor House since the 1950’s. The first lecturer at the Manor House was a Dr Hugh Percival (Percy) Wilkins, the internationally renowned selenographer. The first CMHAS observatory was named after him and located at the Manor house in Crayford. Dr Wilkins was elected member of the BAA in 1918 and served as Director of the BAA Lunar Section from 1946 to 1956. 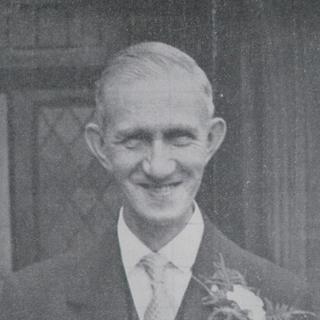 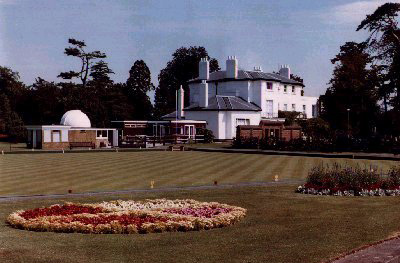 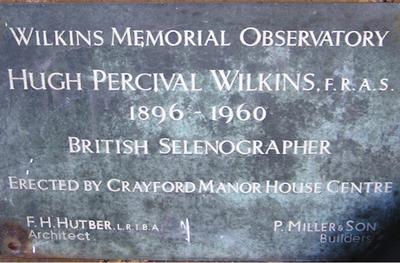 Members of The International Lunar Society – including Dr Hugh Percival Wilkins and a very young Sir Patrick Moore meeting at The Crayford Manor House Centre on the 20th August 1957. Edwin Deavin (Past Chairman of the Society) is sitting at the front, extreme left. 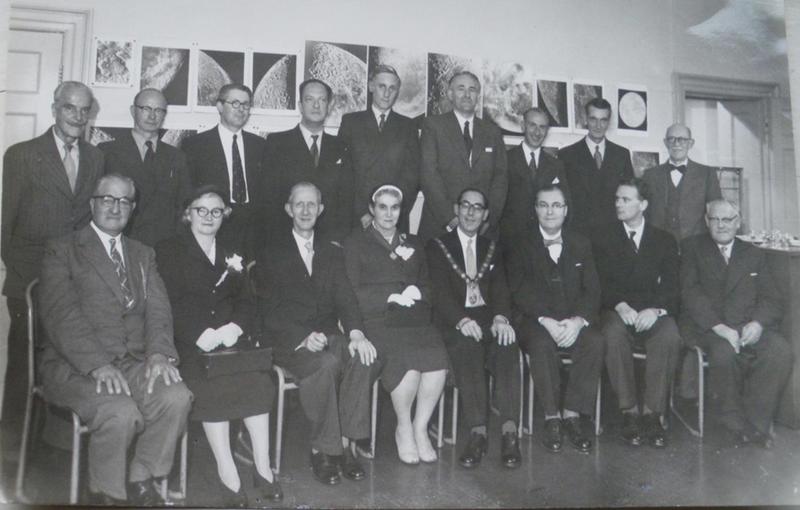 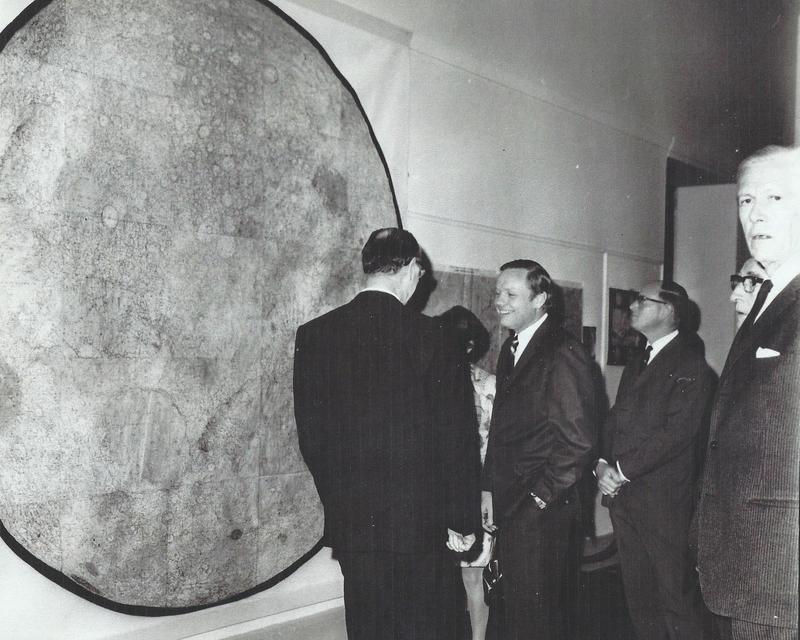 A Pathe Movie about Dr Hugh Percy Wilkins life & his work mapping the moon can be viewed by clicking here.

In a second movie dated Dec 1953; Dr Wilkins talks about a large naturally formed bridge which he has discovered on the Moon to reporter Bernard Forbes which you can view at https://bbcrewind.co.uk/asset/6294bd7d6a23c40023f17ae7?q=telescope.

In a third movie dated 1959; A new observatory and planetarium has opened at the Manor House, an Adult Education Centre in Crayford, Kent and Dr Wilkins explains how the telescope and projector works which can be viewed at https://bbcrewind.co.uk/asset/601bfd9ad3894600279d6d83?q=telescope.

The Life & Work of Dr. Wilkins

This issue of the BAA Lunar Section magazine ‘The New Moon’ is dedicated to the life, work and memory of Dr Hugh Percival Wilkins – which can be read by clicking here. Another article about Dr Hugh Percival Wilkins written by Professor Bill Leatherbarrow who is the current director of the BAA Lunar Section, appears in the Journal of the British Astronomical Association, February 2010 edition. Copies of the article can be obtained by contacting the BAA directly or if you are a BAA member by logging on and downloading a copy from their website. 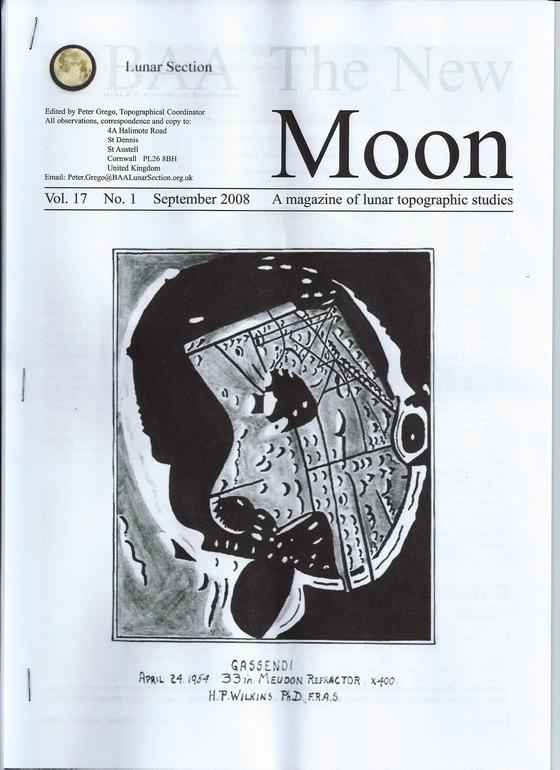 The Crayford Manor House Astronomical Society was established in 1961, a year after the death of Dr Hugh Percival Wilkins, when a Mr Gordon Taylor, who was a professional British astronomer at the Royal Observatory Greenwich (Herstmonceux), travelled from Herstmonceux to lecture and help formally set up the Society along with a Mr Richard Chambers (who later became Chairman of the Society from 2005 until his death in 2012) and a Mr John Wall. CMHAS actually grew from the series of evening classes that Richard Chambers attended in the 1950s when Dr Hugh Percival Wilkins was the lecturer and only become a formal society when Gordon Taylor (BAA president 1968-1970) took over. The first meeting of CMHAS as a Society took place on the 30th November 1961. Gordon Taylor, involved the group in practical experiments along with Richard Chambers (Dick to his friends) who used his organisational skills to ensure that the experiments were carried out effectively by the CMHAS members. The meetings that were held at the Society were conducted on formal lines and consisted of reports on the Society activities & members’ observations etc. Section directors were also appointed to co-ordinate the members’ work on subject areas, such as variable stars and occultations in a similar fashion to that pertaining in the British Astronomical Association (BAA) which the society still has very close links with today. During 1960, The Manor House undertook the conversion of the boiler house into an observatory to hold a 12-inch telescope. The telescope was built by Mr John Wall who also invented the Crayford Eyepiece Mount (CEM) which is known worldwide and featured on BBC Stargazing Live 2014. Over the years the observatory improved, with the fitting of a dome (designed & constructed by CMHAS members) and a 24 inch (60 cm) telescope also built by founder member John Wall. Members who had passed tests of competence had keys to the observatory and unrestricted access.

Video of Crayford Manor House Astronomical Society founder, Gordon Taylor, being presented with a special award from the BAA by Roger Pickard (who was BAA president at the time).

The Society Golden Anniversary Celebration in 2011

Friday 25th November 20111 saw our Golden Anniversary celebrations.  Over 50 members, past and present attended, and special guests a  Golden Anniversary Dinner which was attended by the Society founder Gordon Taylor along with Richard Chambers who was Chairman at that time.

John Wall – a founder member – was unable to attend but did send a message and this was printed and distributed on all the tables.

Greetings: It is with regret that I cannot attend this momentous occasion, but I am with you in spirit and always consider myself a member of the old guard. There are not many of us left and one by one I have seen the sad demise of those with whom I shared the enthusiasm of the carefree days, when the CMHAS was in its infancy.

We soon made impact on the astronomical community and quickly earned the nickname of the “Crayford Mob” through our expertise and high standard of intellectual approach, carefully guided by our strict mentor Dick Chambers, and woe betide anyone who had the temerity to lower standards. Other than that we were a drunken bunch of layabouts as witnessed by the loud laughter and noisy discussions down at the “Dukes Head” late on Thursday evenings after our meetings.

I joined the Manor House way back in the mid-fifties, when nervously, I stood outside the Manor House gate tossing up whether to go in or chicken out and go home. I decided to bite the bullet and went in, I was late, and saw the “warden” as he was known in those days, an owlish young man with horn rimmed specs, who gave me a form to fill in and demanded thirty bob.

I had joined the Astronomy Class run by Dr. Percival Wilkins. “Right up the stairs and turn left” said Len Wilcox, who was to become a good friend of mine in the future. I entered a small dingy room with green lino on the floor and sat in an infernally uncomfortable hard back chair. I turned my attention to an elderly gentleman delivering a lecture on the planets, in a Welsh accent, and noticed that there were only about a dozen people in the room. I was a trifle disillusioned, as I expected a dynamic young lecturer and a room filled to capacity. So began my long and fruitful association with the Astronomy classes and the wonderful intellectual atmosphere of the Manor House.

I made new friends and grew up with the rise of the Astronomy faculty there, dear old Dr. Wilkins found out that I was a telescope maker and I was offered the opportunity to build the first 12 inch telescope, followed many years later by the 24 inch. Dr. Wilkins died in 1960, and Gordon Taylor took charge, here at last was the dynamic young man I originally expected, and he soon suggested that we form an astronomical society. We were never to look back, and now 50 years later we are celebrating the golden anniversary.

In 1969, I invented the Crayford focuser, and was urged by Dick Chambers to write a paper for The British Astronomical Association after demonstrating it at one of our members’ evenings. I had just joined the Association and still remember shaking the hand of Gordon Taylor at my inaugural meeting, as he was then the President, and of course, my tutor. I named the new focuser for the society at Crayford and the town I was born in, and thought nothing more about it. The paper was published in the Journal and the furore started, it was modified by people who supposedly had superior engineering expertise, this amused me as I was already a designer of complex mechanisms for Vickers Armstrongs at Crayford and not an amateur engineer. In due course the posturing and huffing and puffing came to nought, and nowadays it is still the “Crayford Focuser”.

So folks, I contributed my bit to the Crayford mob, and came the day, many years later when I finally decamped and moved up country to live in Coventry. I still miss the Thursday nights, the society life, and I follow its fortunes on the website, noticing with pleasure that we have a new generation of high quality expertise to continue the existence of the CMHAS, the best and finest Astronomical Society in the world.

There are some great lines in this video, and we were honoured that our founder and former President of the BAA was able to attend. Sorry for the sound quality, I was at the back, probably to keep me out of trouble!

Mike Rushton, our Secretary, gives a longer speech… A potted history of the society with special mentions for John Wall, Jack Ells to name just a few. Sorry for the wobbles, I as hand holding the camera and had had a bit to drink (no change there then!)

Photos of the Golden Anniversary Dinner 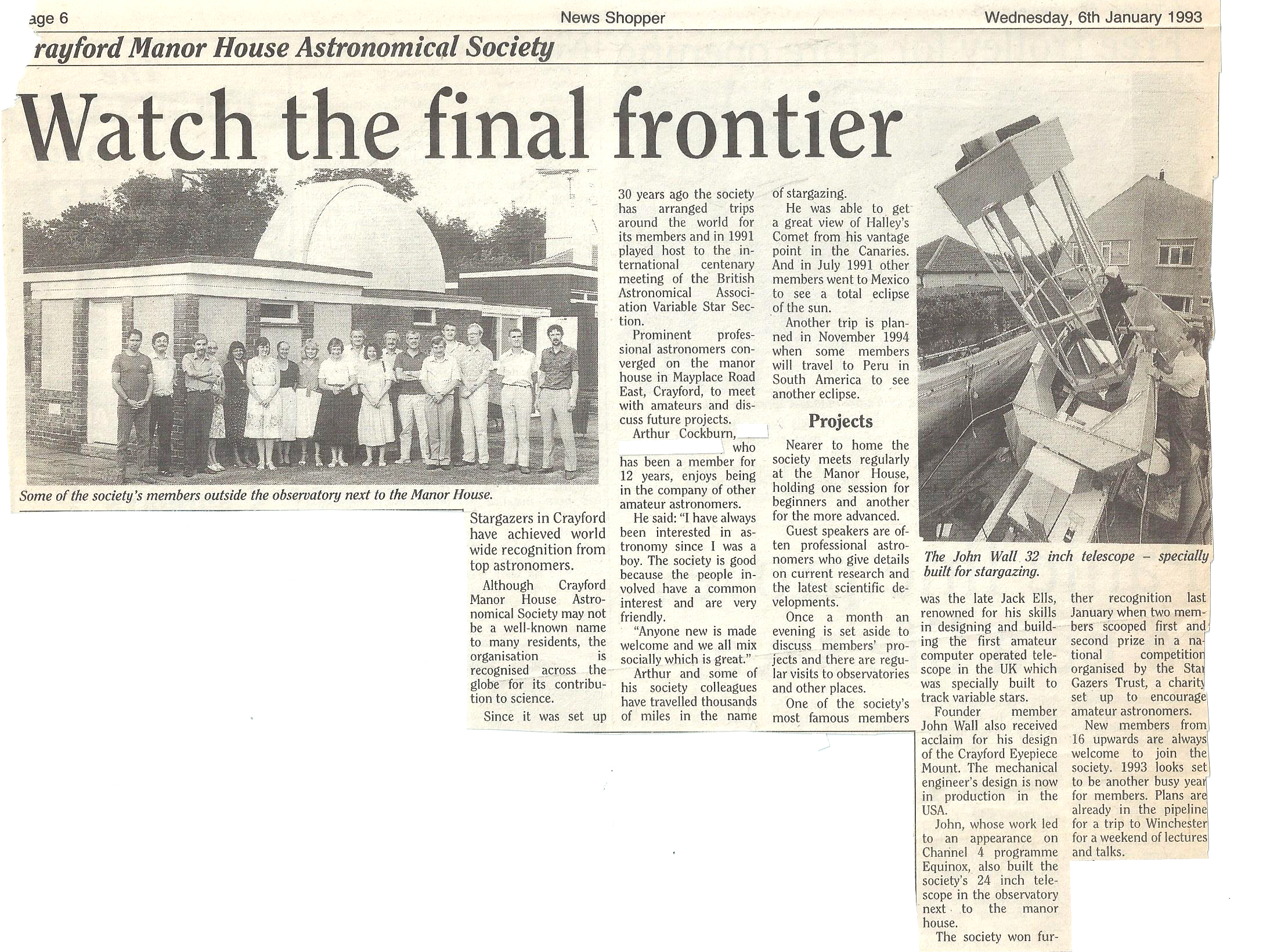 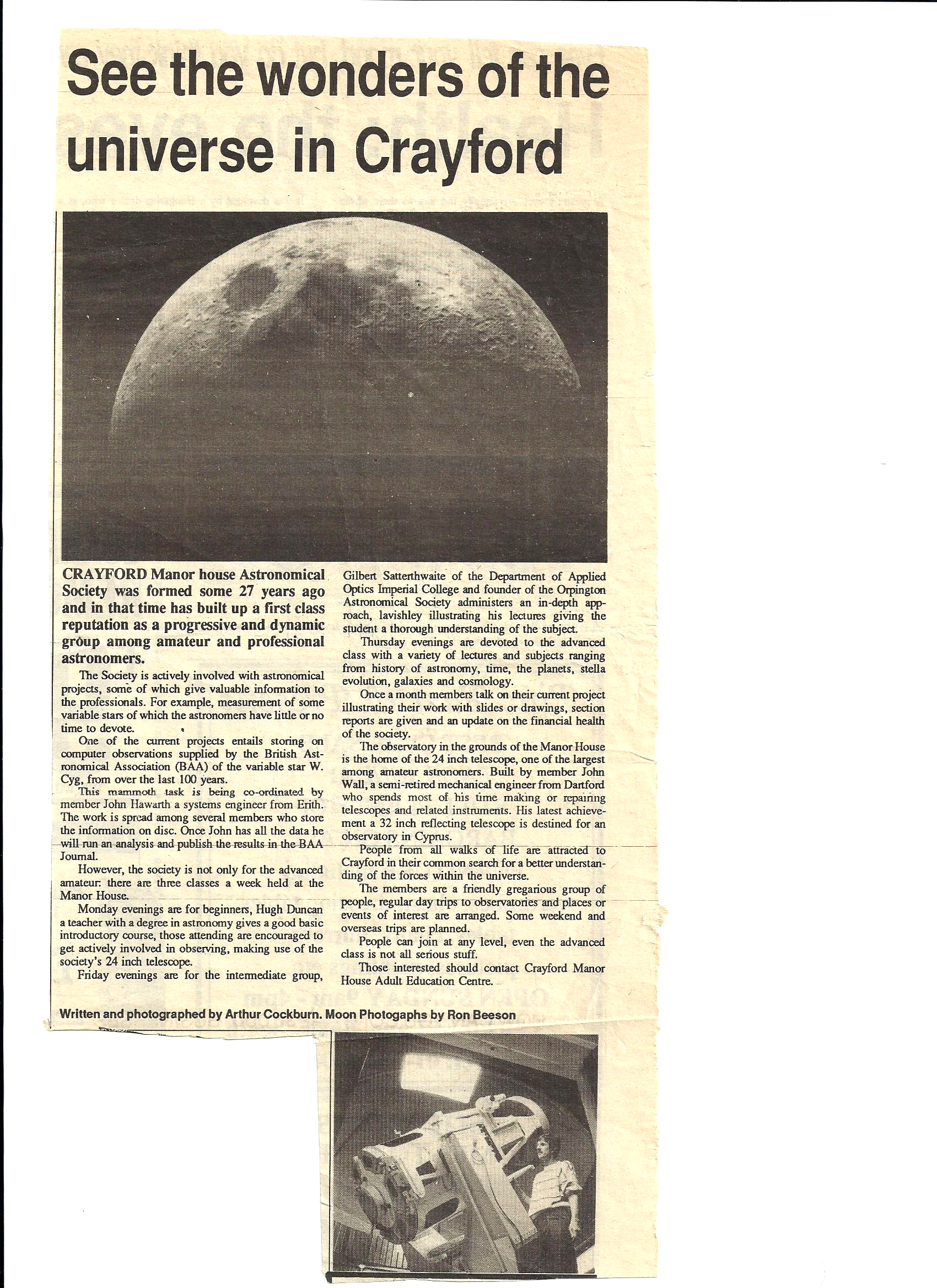 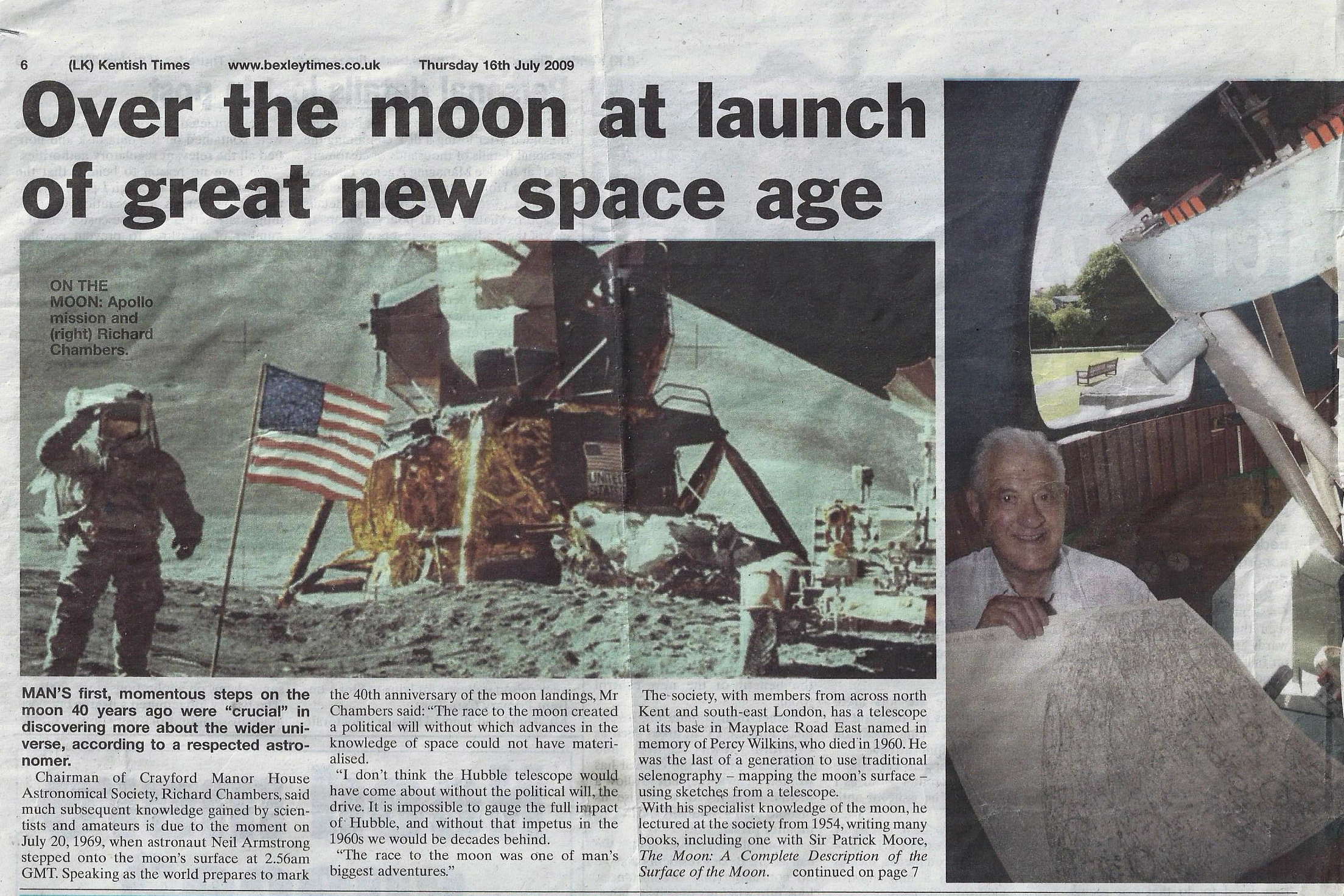 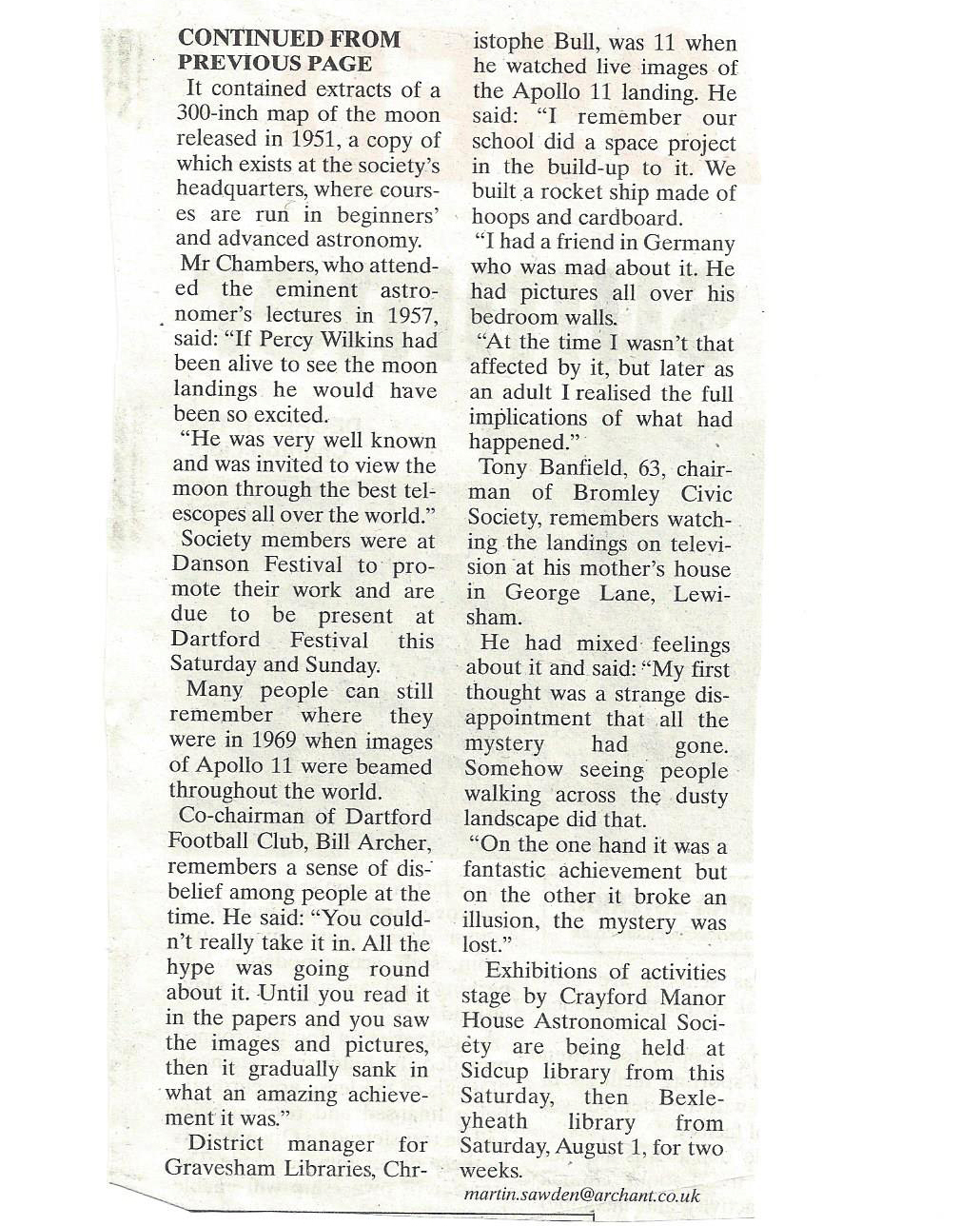 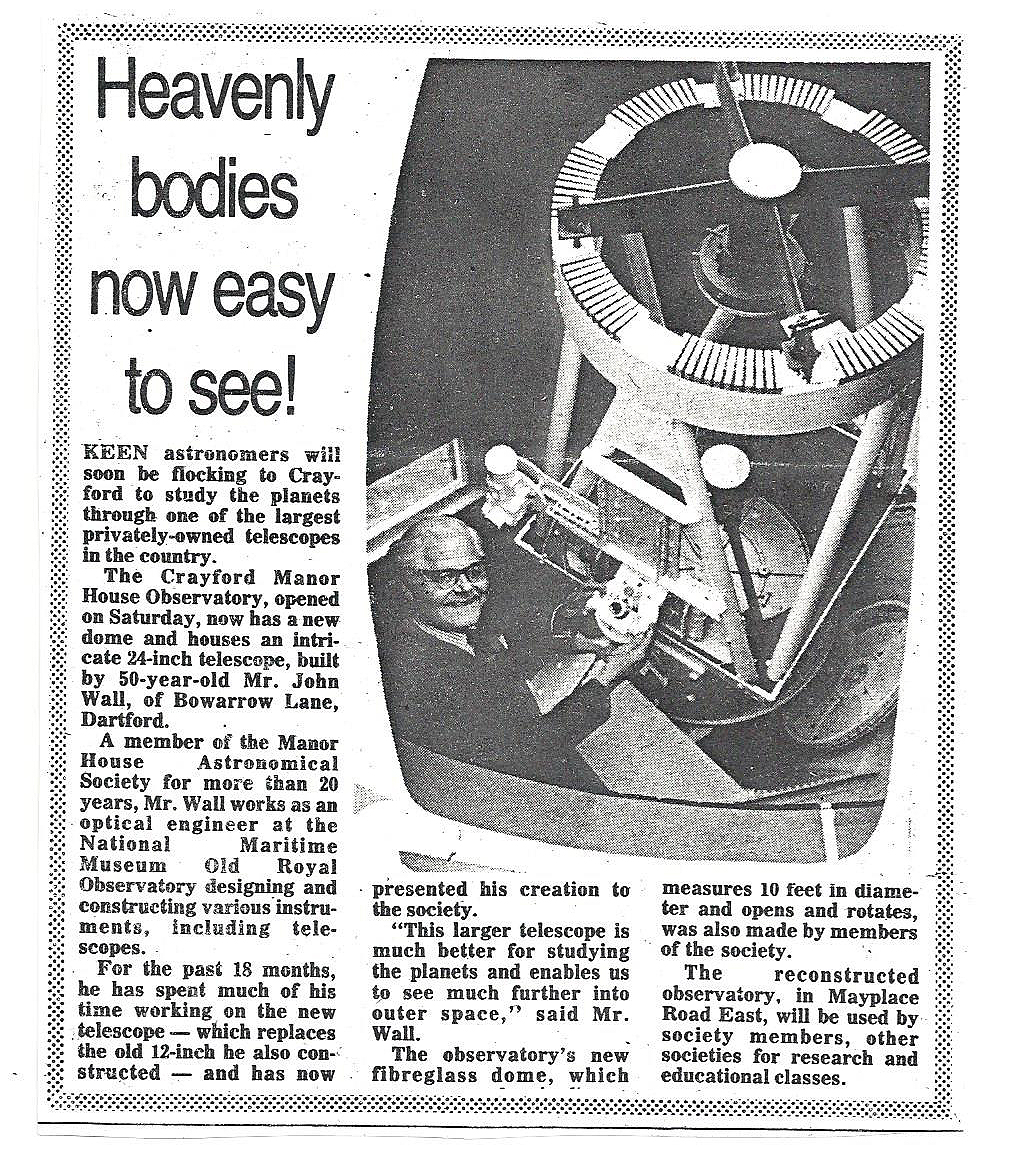 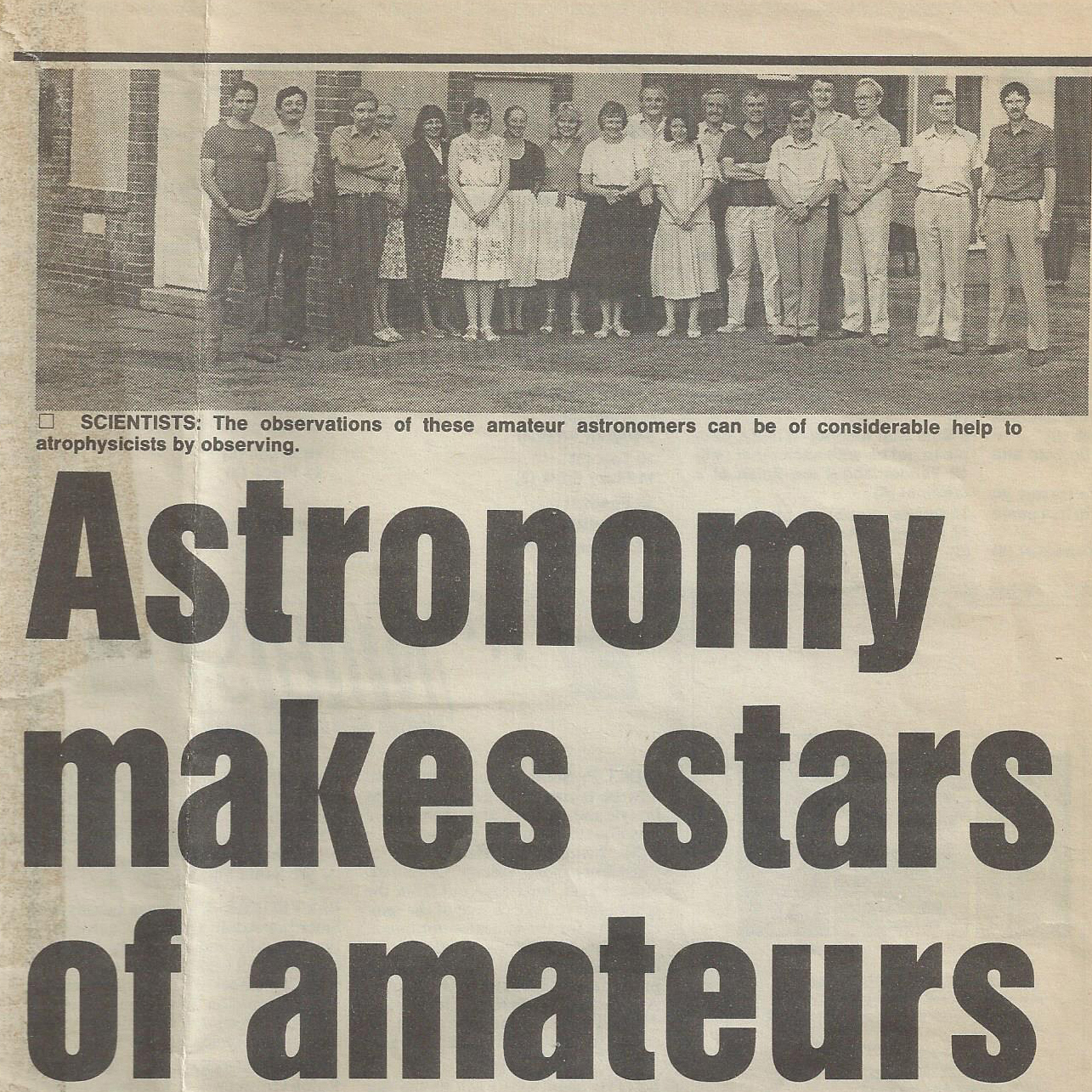 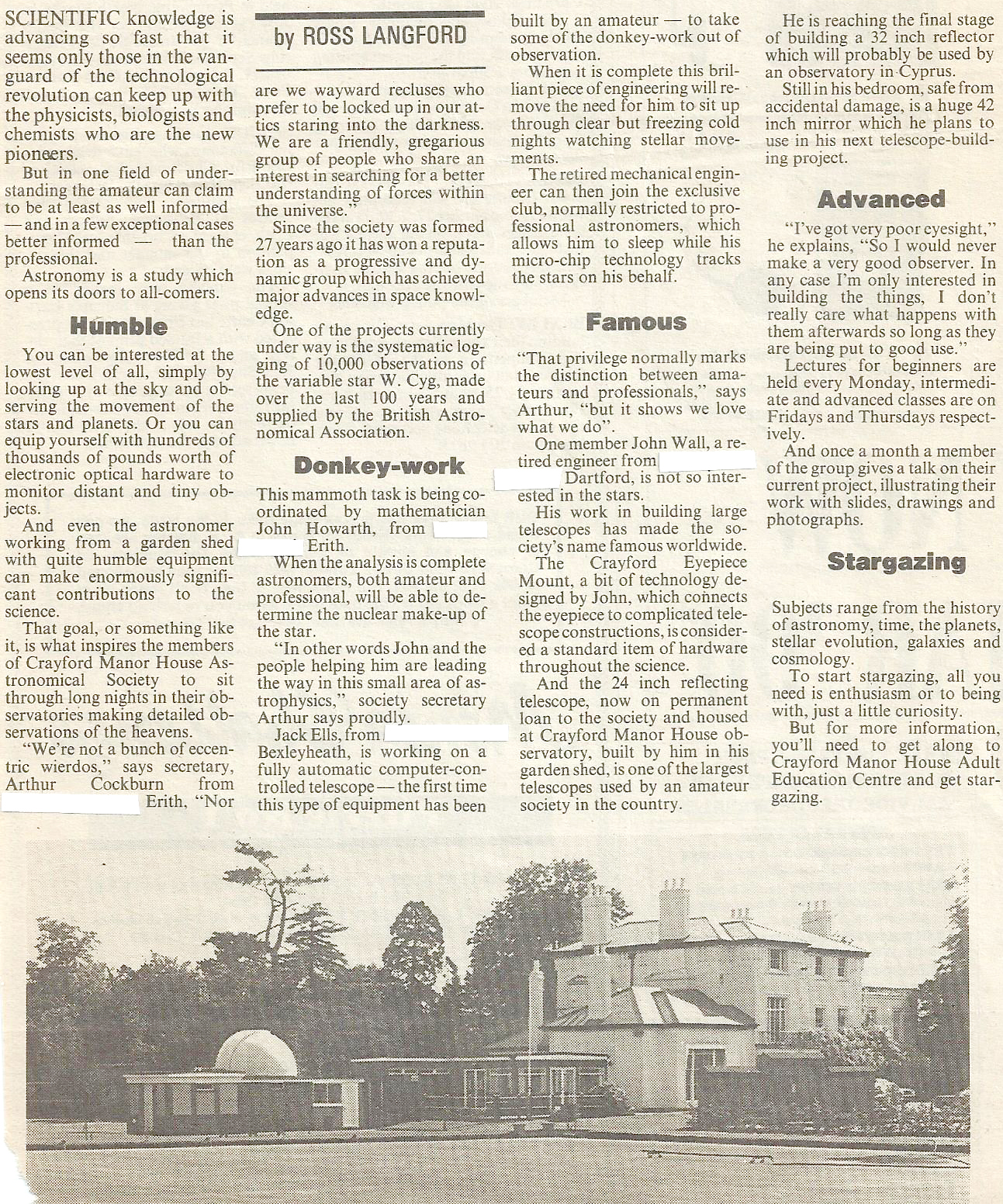 During the first 50 years of the Society, the role of committee member and Chair was a little informal so our records are a little sketchy.  If you have information to help fill in the gaps we would love to hear from you.

Can you help fill in the gaps? contact webmaster@crayfordmanorastro.com

The 30th November 2021 was Crayford Manor House Astronomical Society Dartford’s 60th Anniversary however due to Covid the society was unable to celebrate at that time. Roll on to the 23rd April 2022 and we finally managed to have our 60th Anniversary celebratory dinner at The Boathouse, Danson Park, Bexleyheath.  Member Diane Clarke wrote ‘From the early evening of Saturday the...