Messier 63 (also known as NGC 5055, or the Sunflower Galaxy) is a spiral galaxy in the constellation Canes Venatici consisting of a central disc surrounded by many short spiral arm segments, the galaxy form known as flocculent. M63 is part of the M51 Group, a group of galaxies that also includes M51 (the ‘Whirlpool Galaxy’). M63 is an active galaxy with a LINER nucleus. The existence of a super massive black hole at the nucleus is uncertain; if it does exist, then the mass is estimated as (8.5±1.9)×10^8 M☉. 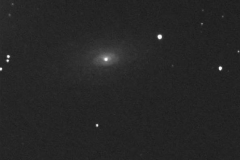