The Black Eye Galaxy (also called Evil Eye Galaxy; designated Messier 64, M64, or NGC 4826) is a galaxy which was discovered by Edward Pigott in March 1779, and independently by Johann Elert Bode in April of the same year, as well as by Charles Messier in 1780. It has a spectacular dark band of absorbing dust in front of the galaxy’s bright nucleus, giving rise to its nicknames of the “Black Eye” or “Evil Eye” galaxy. M64 is well known among amateur astronomers because of its appearance in small telescopes. It is a spiral galaxy in the Coma Berenices constellation. 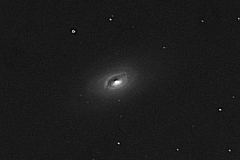