Messier 71 (also known as NGC 6838) is a globular cluster in the constellation Sagitta. It was discovered by Philippe Loys de Chéseaux in 1745 and included by Charles Messier in his catalogue of comet-like objects in 1780. It was also noted by Koehler at Dresden around 1775.

The star cluster is at a distance of about 12,000 light years away from Earth and spans some 27 light years across. The irregular variable star Z Sagittae is a member of this cluster.

M71 was long thought (until the 1970s) to be a densely packed open cluster, however, modern photometric photometry has detected a short “horizontal branch” in the H-R diagram of M71, which is characteristic of a globular cluster. 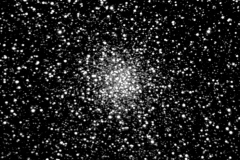