M102 is a galaxy listed in the Messier Catalogue that has not been identified unambiguously. Its original discoverer Pierre Méchain later said that it was a duplicate observation of Messier 101, but more recent historical evidence favours that it is NGC 5866, although other galaxies have been suggested as possible identities.

NGC 5866 (one of two galaxies commonly called the Spindle Galaxy) is a lenticular galaxy in the constellation Draco. This galaxy appears to closely match both the object description (by Pierre Méchain) in the printed version of the Messier Catalogue of 1781, and the object position given by Charles Messier in hand-written notes on his personal list of the Messier Catalogue. 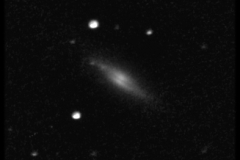