Although Charles Messier never included the galaxy in his famous list, it was depicted by him, together with M32, on a drawing of the Andromeda galaxy; a label on the drawing indicates that Messier first observed NGC 205 on August 10, 1773. The galaxy was independently discovered by Caroline Herschel on August 27, 1783; her brother William Herschel described her discovery in 1785. The suggestion to assign the galaxy a Messier number was made by Kenneth Glyn Jones in 1967.
In 1999, Johnson and Modjaz discovered a nova in M110. 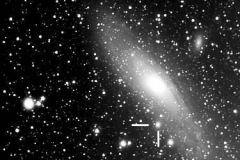