It was a very busy night for CMHASD meteor camera on the 14th/15th Dec 2022.  The Meteor camera captured 141 ‘sightings’ of which 126 were meteors including 4 sightings of 2 meteors in the same shot by the camera.  Out of the 126 meteors 98 were Geminids; the rest were other classes of meteors including some sporadics.

Meteors, also known as shooting stars, are pieces of dust and debris from space that burn up in Earth’s atmosphere, where they can create streaks across the night sky. When Earth passes through the dusty trail of a comet or asteroid’s orbit, the many streaks of light in the sky are known as a meteor shower.  The 98 Geminid meteors detected by the camera were part of the annual Geminid meteor shower.

For more information about the Geminid Meteor Shower please visit the UKMON website at https://ukmeteornetwork.co.uk/showers/2022-geminids/

Below are two out of the 4 photos showing the double meteors captured by the camera. 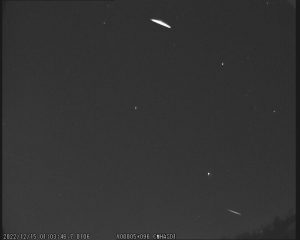 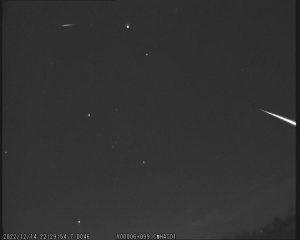