Nice to see some sunspots on the Sun and there are quite a few visible at the moment as Simon Dawes shows in his recent images taken of the Sun on the 20th & 21st April 2022.  NEVER LOOK AT THE SUN DIRECTLY. Please click here for solar observing safely.

Sunspot complex AR2993-94 is crackling away with M-class solar flares and did directly face Earth a day later. They are ‘big’ sunspots too.  The two dark cores are as large as Earth and a magnetic filament attached to one of the cores is more than 100,000 km long. 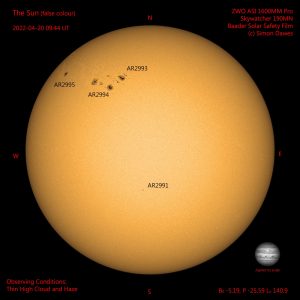 Sunspots are caused by magnetic disruptions of the visible photosphere of the sun which exposes the relatively cooler layers underneath – appearing as a black spot.

The sun’s magnetic entanglements and disentanglement happen in 11-year cycles with each solar cycle having phases of low and high activity. Solar activity cycles have been numbered since 1775, when extensive recording of sunspot activity began.

We are currently in Solar Cycle 25, which has yet to reach its peak. The current cycle is expected to reach its maximum activity in late 2024 or early 2025, this means we may see more and bigger sunspots.