As a Society Project it was planned to find the height and trajectory of a meteor by photographing it from 2 locations. The images could then be reduced using the Zeiss, and triangulation could be applied. The 1993 Perseids offered such an opportunity, and plans were laid for 11, 12 or 13 August – whichever, if any, should be clear. The recent reappearance of Comet P/Swift-Tuttle augured a good display. Following Neil Bone’s advice in “The Astronomer”, July 1993, 30, 351, it was decided to use Ilford HP5 Plus film. Each observer should, if possible, do 36 untracked exposures over a period of 3 hours. Thus each exposure would begin precisely on the hour, or an exact multiple of 5 minutes thereafter (00, 05, 10, 15,…50, 55). Apart from the few seconds needed to wind on at the end of each frame, each camera would be exposing continuously. In addition to taking the photographs, each person should observe by eye the area of sky in his camera field, and record the time of each trail to an accuracy of about a second. Quite a feat, for 3 hours continuously! The participants were divided into groups of 2 or 3 with each group pointing their cameras so that their lines of sight intersected at the best height for meteor trails – assumed to be about 100 km. The details of the points of intersection were calculated by computer and were assigned to the observers so that everyone had a reasonably convenient elevation angle – between about 40 and 65 degrees – and nobody had to look within about 25 degrees of the radiant. A map showing the positions of most of the observers is shown in Figure 1. Everyone was told well in advance the RA and Dec at which their cameras should point. This was on the assumption that they would be setting up at exactly 2100 UT on 12 August. If the setting up took place at a different time, then the observer would have to amend the RA and Dec accordingly, and instructions were given for doing this; essentially, 1 hour (close enough) would be added to RA for each hour after 2100 UT, and 4 minutes would be added for each whole day. In order to try to find the speed of the meteor, some observers were also equipped with light interrupters (choppers) to place in front of the camera lens. These consisted of rotating vanes driven by an accurate and calibrated motor to chop at, typically, 20 Hz (ie 20 interruptions per second). The meteor trail would then appear as a sequence of dashes, and by measuring these the angular rate of travel could be found. Knowing the distance to the meteor, the velocity could then be calculated.

In the event, the evening of 11 August was clouded out. However that of 12 August was clear all over southern England, and a total of 8 observers were able to take about 160 frames between them. Unfortunately, as we now know, the 1993 Perseids did not come up to expectation – at least, not in Europe – and several observers did not record anything, despite 3 hours of filming. Nevertheless a total of 6 trails were successfully recorded on film, plus the usual crop of aircraft, artificial satellites and other artefacts. Of the 6 trails, two appeared to match up, one taken from Alcester in Warwickshire and one taken from Keysoe in Bedfordshire. Both were recorded at 2131:03 UT, and the baseline distance between the observing sites was 96 km. Both observers had used Ilford HP5 Plus, and a 50 mm f1.8 lens. Unfortunately neither site had a light interrupter, so it would not be possible to find the velocity. The photographs are reproduced as Figures 2 and 3.

The measurement of the trails was done using the Zeiss Plate Measuring Machine at the Crayford Manor House. For both photographs this involved measuring each end of the trail, together with 6 reference stars (numbered 1 to 6 in the photographs). The reference positions were then compared with the positions in the SAO Star Catalog, using a least-squares fitting procedure. Once the best relationship between the reference star positions and the Catalog positions had been established, the RA and Dec of the ends of the trail could be found. The details of this procedure are described in “Positional Astronomy” by D. McNally (Muller Educational, 1974), and in the article “The Hewitt Camera Archive at Crayford”, BAA Journal, 102, 6, 1992. The precise ends of these trails are, of course, rather vague, since meteors do not brighten or fade instantaneously, and the ‘start’ and ‘end’ of the trail will depend largely on the eye of the person making the measurements. Fortunately, it is possible to use the measurements to find the trajectory, provided only that both measurements lie on the trail and are as far apart as possible. The results of the reductions of the measurements are shown in Figure 4 (Alcester) and Figure 5 (Keysoe). The residual error coefficients are of the order of 0.5 minute of arc for the Alcester image, and 1 minute of arc for the Keysoe image. These are not as good as could be expected from a Hewitt Plate, but it must be kept in mind that the Hewitt camera and its plate is a far higher precision system than an SLR Camera with 35 mm cartridge film; and that whilst the camera with its 50 mm focal length gives a scale of about 0.9 mm/deg, the Hewitt’s scale is 10 mm/degree: thus positional errors on a 35 mm film are intrinsically about 11 times more significant in terms of angular error than those on a Hewitt plate. The images of the reference stars were, of course, themselves trailed over the 5 minutes of the exposure. The film reduction was done using the start of all the star trails – that is, their positions at 2130 UT. Since we knew the exact time of the event – 2131:03UT – it was necessary simply to convert this difference to RA and Dec, then to subtract it from the calculated meteor start and finish positions. This correction was made to the positions before they were used for triangulation.

The method used to triangulate the meteor’s trajectory is best explained with the aid of Figure 6. Figure 6 Geometry of Triangulation

A and B are the camera positions: the camera at A records the meteor from P to R, whilst the camera at B records it from Q to S. The positions of A and B can be found geometrically from a knowledge of both observers’ grid references, height above sea level, and the precise figure of the Earth (here assumed to be an oblate spheroid, polar radius 6356.75 km, equatorial radius 6378.40 km). 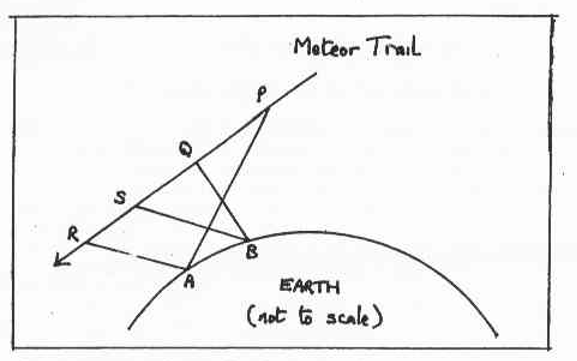 The rest is plain Euclidean geometry: the 3 points A, P and R define a unique plane in space, and the points B, Q and S define another plane. Unless we are very unlucky and the two planes are exactly parallel, they will intersect to form a straight line PQSR whose trajectory can be calculated quite easily. The line points back to the meteor’s origin which should coincide approximately with the radiant (though in practice the path is bound to be bent by the
Earth’s atmosphere and gravity).

When A is identified with Alcester and B with Keysoe the following facts emerge from the calculation:

(iv) The slope of the trajectory was about 40.1 degrees from the horizontal, and was heading roughly south on a line above Oakham and Corby.

(v) The radiant was calculated to be 61 deg N Dec, 1h 30m RA (1950) which differed from the position published in Norton’s Star Atlas 2000.0 (58 deg, 3h 8m) by about 12 degrees. This discrepancy could have been due to deflection of the meteor either by the upper atmosphere, or by gravity. On the other
hand, it is perfectly possible that the triangulated meteor was a sporadic.

Although only one meteor was observed from 2 locations, the project showed that such photographs could be used to derive details that could not be deduced from one observation alone. If an optical interrupter had been operating at either site then the speed could also have been computed. In any case, many more meteors would need to be tracked before we could obtain statistics regarding their orbits.

Following this project plans were made to observe the Geminids in mid December 1993 and the Quadrantids in early January 1994. Unfortunately the former were completely clouded out and the latter nearly so. In fact 2 intrepid observers did expose film on the evening of January 3, but neither recorded any trails.
For the 1994 Perseids, all we now need is good weather and good meteors – evidently a rare combination!

For Start of Trail:

For End of Trail:

For Start Of Trail:

For End of Trail: