The latest stunning image of the Veil Nebula by member Neil Webster. Updated with another 3 hours worth of imaging grabbed on the night of the 21st Nov 2022.

Neil said ”I finally managed to get enough data to start to show the incredible subtle details in this object.  This was processed from 5 hrs of data amassed over 3 evenings.”

The Veil Nebula is a diffuse nebula located in the northern constellation Cygnus, the Swan.  It is the expanding remains of a massive star that exploded about 8,000 years ago.

Called the Veil Nebula, the debris is one of the best-known supernova remnants, deriving its name from its delicate, draped filamentary structures. The entire nebula is 110 light-years across, covering six full moons on the sky as seen from Earth.

It lies a few degrees to the south of the star Epsilon Cygni, also known as Aljanah.

Aljanah is one of the stars of the Northern Cross and marks the right wing of the celestial Swan. 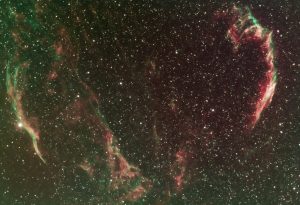