Member Neil Webster has been busy……….

This is the latest stunning deep sky image by Neil of Hydrogen Alpha nebulosity surrounding the star Gamma Cygni (Sadr) taken on the 20th October 2022. 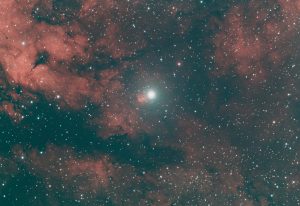 Sadr, Gamma Cygni (γ Cyg) is a yellow-white supergiant star located in the constellation Cygnus. Sadr is the constellation’s second brightest star after Deneb with an apparent magnitude of 2.23. It is the star forming the intersection of an asterism of five stars called the Northern Cross an asterism that dominates the summer sky in the northern hemisphere. Sadr lies in a rich field of the Milky Way and is surrounded by the diffuse emission nebula IC1318 also known as the Gamma Cygni Nebula or Sadr Region.