Taken from a few days ago; this is member Simon Dawes 48th accepted transit for the ExoClock project of exoplanet TrES-3b.  TrES-3b is a gas giant exoplanet that orbits a G-type star GSC 03089-00929. It has an orbital period of just 31 hours, is nearly twice the mass of Jupiter and is 0.02282 AU from its star.

The planet TrES-3b is named Umbäässa. The name was selected in the NameExoWorlds campaign by Liechtenstein during the 100th anniversary of the IAU. In the local dialect of southern Liechtenstein, Umbäässa is a small and barely visible ant.

Its discovery was announced in 2007.  It is the 3rd transiting planet found by the Trans-Atlantic Exoplanet Survey. It was discovered in the constellation Hercules about 10 degrees west of the star Vega.  If you look at the curve you can see that it doesn’t have a flat bottom which means from our viewpoint the planet occults the star right on its edge – a grazing occultation. 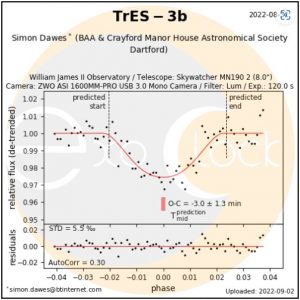 Also measured by Simon is the transit of exoplanet WASP-60b.

WASP-60b orbits at a distance of 8.25 million km from its G1-type star, taking 4.3 days to go round its orbit in the constellation of Pegasus. The system is a distance of 400 parsecs away from us. 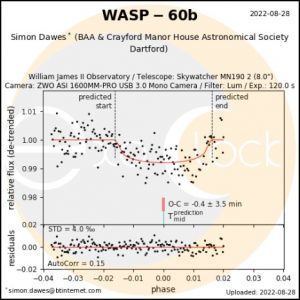