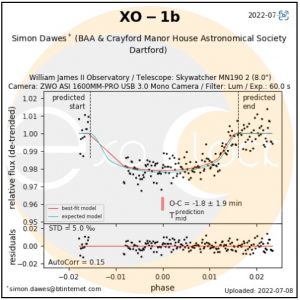 XO-1b is an exoplanet approximately 536 light-years away in the constellation of Corona Borealis. The planet was discovered orbiting the yellow dwarf star now designated XO-1 in 2006.  The planet XO-1b is named Negoiu. The name was selected in the NameExoWorlds campaign during the 100th anniversary of the IAU. Negoiu is the second highest peak in Romania.  It is a little bit larger than Jupiter. It is a hot Jupiter.

The XO Project team employed the relatively inexpensive XO Telescope, made from commercial equipment, to search for exoplanets. This telescope is on the Hawaiian Island of Maui.