What is Drift Scanning?

If you try to take an image on an un-driven mount the stars will trail as the Earth rotates. Now imagine a star on a CCD, it will move from pixel to pixel producing a line rather than a point source. Now if we could move the image on the CCD at the same rate as the star is moving across it, we would be able to keep the star as a point source on the image even though it is moving across the CCD. The total time of the exposure would be the time it takes for the star to cross the CCD.

Drift scanning employs a special feature of some CCD cameras, such as the SBIG ST-7XME CCD camera. Data on these CCD’s can be read out one line at a time, and when this is done, the the whole image is shifted, so as the bottom line is read out to the computer, all the other lines move down. If the CCD is rotated correctly it can be read out in the same direction a star travels across it, and if it is read out at the same speed as a star travels across the chip from pixel to pixel we will have pin point stars.

This seems a lot of bother when you could simply drive your mount, so why do it? Well by employing this method it is possible to produce very long images like the one below.

Setting up the software

Only works with certain focal lengths
Differential trailing can be a problem
Viewing the images (they are large up to 32,000 pixels wide not many viewers will display them 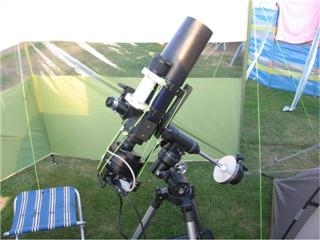