The advantage of observing meteors with radio is that cloud and daylight don’t interfere. A radio set-up needn’t be expensive, budget about £150 if you are starting from scratch for a simple system.

Theory for those in a rush

VHF radio signals travel ‘line-of-sight’ so a transmitter over the horizon will generally not be receivable, however when meteoroids ‘burns up’ in the atmosphere they ionise the air around them creating a reflective surface that the signal from the distant transmitter can bounce off of and it is this signal we are trying to receive, this is called forward scatter.

It is generally accepted that best results are achieved from frequencies in the range of 30-100MHz, however commercial stations in this band are being turned off as part of the Europe wide digital switch over so I have chosen the GRAVES radar in France, this transmits at 143.050MHz and should be around for some time.

The antenna needs to be built for the radio frequency being observed, the design I have chosen is a Yagi, these are the same design as most TV aerials, and a design with a modest gain and only a few elements will provide a wide ‘field of view’, these can be bought commercially or can be made.

The radio scanner needs to be tuned just outside of the frequency required, mine is tuned to 143.049MHz and set to the upper side band (USB), this will result in a tone, rather than the actual signal being picked up when a meteor reflects the signal – more information on how this works can be found in ‘The Radio Sky and how to Observe It’ by Jeff Lashley.

The audio output from the receiver is passed into the soundcard of a PC and spectrum analyser software (Spectrum Lab) is used to identify and log the meteors.

Spectrum Lab comes with a basic scripting language, I have set this up to complete the following tasks for me.

I also use Spectrum Lab to continually record the signal strength, noise and trigger level to a CSV file.

The main script (points 1-7 above) uses Spectrum Lab’s ‘conditional actions’ and this is explained below, I also configure Spectrum Labs buttons to toggle functions within the script

Variables used in the script

SIG=Current measured signal value
NOI=Current noise value
A0,A1,A2,A3,A4,A5 = temp stores for noise value
M_DUR= duration of current meteor in spectrum lab cycles, if M_DUR =1 then this is a new meteor
TOTAL_DUR = total duration of all meteors for the hour
COUNT_HR = Hourly meteor count
M_MS = holds mmss of last test
M_HR = current hour of last test
M_TIM = time meteor first detected, this is stored for use in file names etc.
M_SIG = the signal strength that triggered the meteor
M_FRQ = the Frequency that triggered the meteor
M_NOI = the noise when the meteor was triggered
MAX_DUR = holds the longest duration for the whole hour
M_YMD = date in YYYYMMDD format
TEST_A = holds the result of a test to assess if this is a meteor
TEST_B = holds the results of a test to decide if this is a meteor

RUN = used to tell the script to start recording, this prevents false meteors on start up
CHK = used to flag that a suspect meteor signal has been found
FLAG_A = 1 if test A passes
FLAG_B = 1 if test B passes
Log_WAV = ON if periodic wav files are required (this uses loads of disk space so default is off, I use for debugging and during showers so I have a manual check
log_PLOTpic = ON if a picture of the plot if captured, default is off as I found this not so useful
FLAG_TIME = flag to ensure RMOB files are only written once per hour

You can edit THRESHOLD=20 to any value to suit your equipment, this is the level above the measured noise that the signal needs to be to be considered a suspect meteor
02 if( (never) ) then REM Threshold = difference that triggers meteor check,
03 if( (initialising) ) then THRESHOLD=20:LOW=1740:HIGH=2780

DIR is the folder where you want to store the files/logs created, makes sure you have this created first.
M_NAM is the prefix that all log files will have
04 if( (never) ) then REM DIR = folder to store logs; M_NAM = prefix name for meteor files
05 if( (initialising) ) then DIR=”c:\\spectrum\\meteorlog\\”:M_NAM=”Meteor”

The default when the script starts is to not save a WAV file or capture a screenshot of the plotter window when a meteor is identified, you can change these to ON if you prefer the default to be ON, These parameters are also controlled by the Spectrum Lab buttons which toggle these logging options on and off (see later section)
07 if( (initialising) ) then log_WAV=OFF:log_PLOTpic=OFF

RUN is used as a switch it is in the OFF state when the script first runs to give SpectrumLab a chance to settle down, it is turned on when Timer4 expires, timer4 is set to expire in 10 seconds
12 if( (initialising) ) then RUN=OFF:CHK=OFF: TST=OFF
13 if( (never) ) then REM M_ = possible Meteor ; M_TIM=time ; M_SIG=Signal; M_FRQ=Frequency; M_NOI=noise; M_DUR=duration in cycles
14 if( (never) ) then REM M_YMD= date in YYYYMMDD format; M_HR=hour; M_MS= minutes seconds in MMSS format

Once Timer4 has expired the logging of meteors will begin, this line writes onto the waterfall some text to let you know that the automatic logging has started
20 if( (timer4.expired(1)) ) then RUN=ON:sp.print(“Let’s find some Meteors! By Simon Dawes Version:”+VERSION):NOI=noise(LOW,HIGH)

This line checks to see if the signal has breached a THRESHOLD above the noise (NOI), if it has CHK=ON and additional test will be performed to try and distinguish between meteors and other signals (this sort of works for me, but might not work for you, you can adjust the sensitivity of these tests – on lines 29 and 30) it will only do this then the suspect meteor is first detected
24 if( ((M_DUR=0)&(SIG>(NOI+THRESHOLD))&(RUN=ON)) ) then CHK=ON

I now take some measurements that will be used to confirm this is a meteor, TEST_B (sigma) measures the standard deviation in a band 20Hz wide centred on the peak frequency, if the standard deviation is low the the signal levels across this band are not varying much, this (for me at least) is a good indicator of a meteor. TEST_A is just a spot check a few hertz below the peak frequency to see if the value is much different, again for a meteor I have found this should not vary much. These are empirical tests rather than text book definitions, they may have little basis but seem to help weed out other signals.
27 if( (CHK=ON) ) then TEST_B=sigma(M_FRQ-10,M_FRQ+10):TEST_A=sqrt((peak_a(M_FRQ-10,M_FRQ-5)-M_SIG)^2)

Lines 31 & 32 control the thresholds for the secondary meteor tests, these should be set at the commissioning stage until you get a reasonable correlation between what you think is a meteor and what is detected, when commissioning start with high values, or if you don’t want these secondary tests replace simply delete the ‘&(TEST_………)’ so that if CHK is on the FLAG_A and FLAG_B are always set.
31 if( ((CHK=ON)&(TEST_A<6)) ) then FLAG_A=1
32 if( ((CHK=ON)&(TEST_B<7)) ) then FLAG_B=1

If line 33 is true then all conditions for a deciding this is a meteor are satisfied, so the timers are reset, this ensures that the meteor has finished before it is logged, otherwise you can get multiple logs for a single meteor, the disadvantage of this is you might count multiple meteors as a single meteor, so the values in the brackets will always be a compromise.

Here we have the user notification/logging section of the script, they are all controlled by the various timers timing out.
37 if( (never) ) then REM ———– Notify User of Meteor ————

When timer3 expires I print the details on the waterfall screen to provide the user feedback, currently as I am still tweaking the script I record more information than is really necessary, I set-up the waterfall screen so that the LOW frequency is in the middle of the screen so the text I write over it doesn’t obscure the too much. The meteor duration is then reset to zero.
39 if( (timer3.expired(1)) ) then sp.print(M_TIM,”S=”,M_SIG,”dBm N=”,M_NOI,”dBm F=”,M_FRQ,”Hz t=”,M_DUR,” S:N=”,M_SIG-M_NOI,”Test:”,TEST_A,TEST_B):M_DUR=0

Controlling the script from the Spectrum Lab buttons

The buttons in Spectrum Lab are very useful for outputting information and triggering events, I use them to provide output from my script and some control of the switches in the script. To edit the buttons you right click on them. 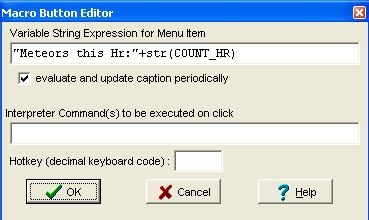 This displays in a button how many meteors there have been in the current hour.

clicking the button has no effect 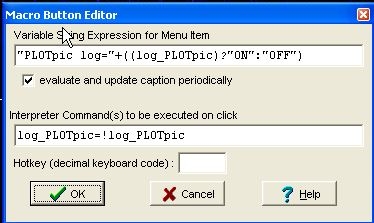 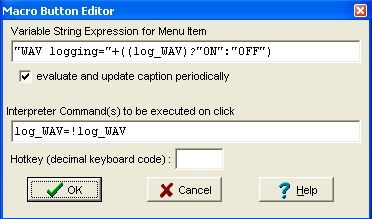 Summary of files output by the script 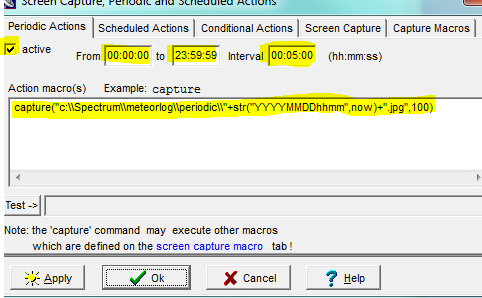 I take an image of the waterfall every 5 minutes , this is also the period displayed by the waterfall so I have images for the whole period.

I also monitor everything with the built-in plotter, note it is plotting variables from the script rather than direct values.