Another for the ExoClock project…… 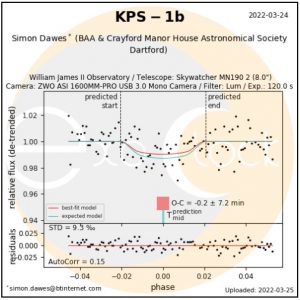 KPS-1b orbits a star similar to the Sun with a period of 40 hours.

The mass and size of the exoplanet KPS-1b are close to the characteristics of Jupiter, but it is located very close to its parent star so the temperature of the atmosphere KPS-1b is much higher than that of Jupiter.

The night Simon did the observations for KPS – 1b Simon said ”the transparency was low – when I left the society meeting you could see the water particles in the air in the headlamp and under the street lights, so I’m pleased I got anything at all!”