Here is the latest exoplanet transit observed by member & trustee Simon Dawes for the ExoClock project. It is of  WASP-12b a doomed EGG shaped planet.

WASP-12b is a hot Jupiter that orbits so close to its parent star, it is being torn apart and it takes this sizzling gas giant alien world only 1.1 days to completely circle its parent star! 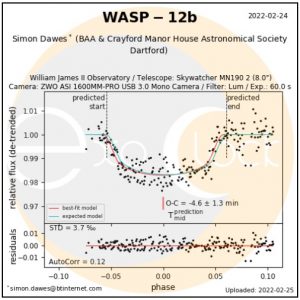 The doomed planet is being eaten by its parent star, according to observations made by NASA’s Hubble Space Telescope, the Cosmic Origins Spectrograph (COS). The planet may only have another 10 million years left before it is completely devoured.

The planet WASP-12b, is so close to its sun like parent star that it is superheated to nearly 2,800 degrees Fahrenheit and stretched into an egg shape by enormous tidal forces. The atmosphere has ballooned to nearly three times Jupiter’s radius and is spilling material onto the parent star. The planet is 40 percent more massive than Jupiter.

“We see a huge cloud of material around the planet, which is escaping and will be captured by the star. We have identified chemical elements never before seen on planets outside our own solar system,” says team leader Carole Haswell of The Open University in Great Britain.

WASP-12b reflects just 6% of the light that shines on its surface. As a result, the exoplanet has been described as “black as asphalt”, and as “pitch black.” 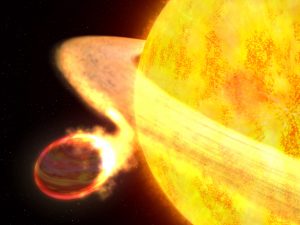 Simon along with other amateur and professional astronomers have been observing exo-planet transits as part of the ExoClock project for the Ariel Mission due for launch in 2028.  Each observation takes between 4 and 5 hours typically so is quite a commitment. Well done Simon.

The Ariel mission will observe spectroscopically around 1000 exoplanets to further characterise their atmospheres. For the mission to be as efficient as possible, a good knowledge of the planets’ ephemerides is needed before its launch in 2028. While ephemerides for some planets are being refined on a per-case basis, an organised effort to collectively verify or update them when necessary does not exist. In this study, we introduce the ExoClock project, an open, integrated and interactive platform with the purpose of producing a confirmed list of ephemerides for the planets that will be observed by Ariel.