The Double Cluster is the common name for the naked-eye (OK you will need Binoculars in light polluted areas such as Crayford) open clusters NGC 884 and NGC 869, which are close together in the constellation Perseus. NGC 884 and NGC 869 are at distances of 7600 and 6800 light-years away, respectively, so they are close to one another in space as well.

They are also blue-shifted, with NGC 869 approaching Earth at a speed of 22 km/s and NGC 884 approaching at a similar speed of 21 km/s. Their hottest main sequence stars are of spectral type B0. 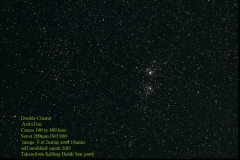 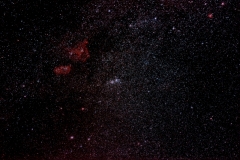 Image of the Double Cluster taken from Kelling Heath with a Canon 600D, Modified with the Full Spectrum Mod and a Clip-in CLSCCD filter 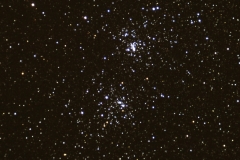 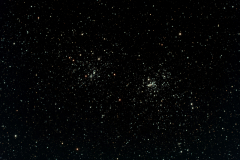