The Rosette is a popular object for imagers, the complex has the following NGC designations:

The cluster and nebula lie at a distance of some 5,200 light years from Earth (although estimates of the distance vary considerably) and measure roughly 130 light years in diameter. The radiation from the young stars excite the atoms in the nebula, causing them to emit radiation themselves producing the emission nebula we see. The mass of the nebula is estimated to be around 10,000 solar masses.

It is believed that stellar winds from a group of O and B stars are exerting pressure on interstellar clouds to cause compression, followed by star formation in the nebula. This star formation is currently still ongoing.
A survey of the nebula with the Chandra X-ray Observatory in 2001 has revealed the presence of very hot, young stars at the core of the Rosette Nebula. These stars have heated the surrounding gas to a temperature in the order of 6 million kelvins causing them to emit copious amounts of X-rays. 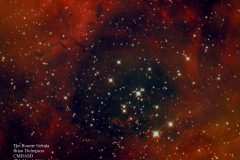 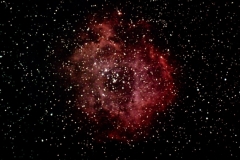 Image by Julian Tworek using a DSLR and unknown telescope. 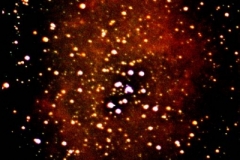 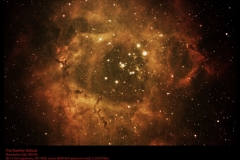 Imaged by Simon Dawes
Imaged on 2019-01-29
I’d taken 2hrs of images but wasn’t able to get Deep sky stacker to stack more than 56 minutes.
Taken with a Canon 600D (Full Spectrum Mod) with a CLSCCD filter on a Skywatcher MN190, mounted on an EQ6 Pro 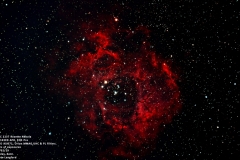 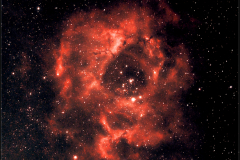