The ‘Western Veil’ or Witches Broom Nebula is part of the Cygnus Loop, other parts of the loop include , the ‘Eatern Veil’ (Caldwell 33), and Pickering’s Triangular Wisp. It is part of a large, relatively faint supernova remnant in the constellation Cygnus. The source supernova exploded some 5,000 to 8,000 years ago, and the remnants have since expanded to cover an area of ~3×3 degrees. The distance to the nebula is not precisely known, with estimates ranging from 1,400 to 2,600 light-years.

The analysis of the emissions from the nebula indicate the presence of oxygen, sulfur, and hydrogen.
The nebula is notorious among astronomers for being difficult to see visually, even though it has a bright integrated magnitude of 7. However, a telescope using an OIII filter (a filter isolating the wavelength of light from doubly ionized oxygen), will allow an observer to see the nebula clearly, as almost all light from this nebula is emitted at this wavelength. Using an 8-inch (200 mm) telescope equipped with an OIII filter, one could easily see the delicate lacework apparent in photographs. With an OIII filter, almost any telescope could conceivably see this nebula, and some argue that it can be seen without any optical aid, excepting an OIII filter held up to the eye. This is also one of the largest, brightest features in the x-ray sky. 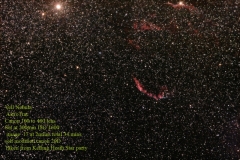 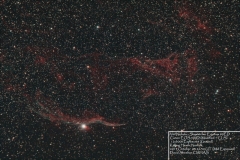